Welcome back to 1969 Inc everyone! This is the second installment of our Bring a Trailer series, started here, and in this article we are going to talk about a beautiful 1974 Porsche 911 that I spotted while scrolling through the website yesterday! This car has quite an interesting story because for a while it was a completely dedicate track car until it was backdated with parts that were a little more original to the car’s 1974 body style. So, without further ado let’s get right into the article starting with the looks!

This 1974 Porsche 911 is quite a looker. The 1974 body has always been a stylish car but this one has a wider stance as well as some bright colors to really catch your attention. In fact, almost the entirety of the car is painted in an almost neon yellow color that really alerts everyone around that you are driving a Porsche. Maybe a bit pompous but in the end, who cares? The color actually looks really cool and that’s what matters.
The front end has the classic Porsche 911 look with the two circle headlights protruding from the sloping front bonnet. There is, however, one change that is somewhat notable. That is the grill that has been formed below the front bumper in the middle of the grill. The grill is at first a bit confusing because the car has its engine in the rear but I believe it is for the purpose of racing! Most likely it helps to provide the car with more down force and to cool the brakes.
The car has another intake right above the hood and right below the windshield that serves the purpose of directing the air our and around the car. This adds downforce while on the track and helps to create a more aerodynamic airflow. The final aero feature that was added to this car was the duck tail rear wing that sticks up from the car to help cool the engine and provide a lot of downforce for the rear wheels. This is not original and was added to the car when it became a track specific car.
The car has kept a lot of its normal 1974 Porsche look. Mostly, the body is still the same and the graphics are also similar. The car has the signature Porsche stamp across the bottom of the door just in case people weren’t sure what you are driving! One other thing that has changed though are the rims. The original rims have been replaced by the previous owner with a newer look that makes the car look even sportier!
Overall, this is a really good looking car. It is flashy and fun but still is able to keep its original Porsche look. To add to that, it is also was a dedicated track car that has been refurbished so you could drive on the road. Let’s move onto the specs of this car though because there are quite a few impressive ones that I want to tell you guys about! 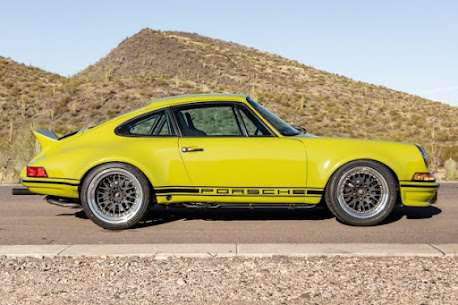 This car has some pretty interesting specifications because it was a dedicated track car! Firstly, let’s take a look at the engine! Packed in under the duck-tail spoiler that is the engine cover is a classic Porsche 3.6L Flat 6 that was actually taken from a Porsche 993 9ll model. This means that even though the body is from the 70s, the engine is from the 90s. This allows the car to have a newer driving feel even though it is almost 50 years old!
The engine itself creates about 277 horsepower on the dyno and 241 lb feet of torque which is certainly enough to get your around a track pretty quick! While there are no specified 0-60 times or top speeds, I would assume that it probably can do those times quite a bit faster than the standard 1974 911 model can, which means that this is a pretty quick car! To add to that, a custom exhaust has been added to improve both performance and driving pleasure!
Since it was a track car, it has also been outfitted with all the track necessities like a racing seats and a dedicated roll bar for safety. While this car has been retrofitted and refurbished to drive on the road, it still has a lot of its track qualities that make is such a cool car. Where else are you going to find a 1974 911 with a 993 engine, a roll cage, a custom exhaust, and custom rims? 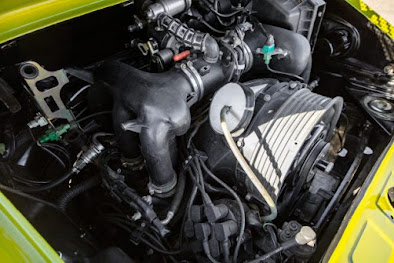 If you think this is as awesome of a car as I do and would like to look more into the listing, you can go and check it out here: 1974 Porsche 911. I hope that you guys enjoyed this article! If you did, you can support the blog by subscribing to our News Letter! If that’s not your thing, you can also share this article with a friend or family member or leave us a comment in the comment section below! Thanks for reading!